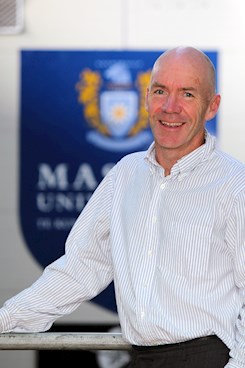 Dr Andy Martin is a professor of sport management and physical education in the School of Sport, Exercise and Nutrition, Massey University. His research focus is on sport-related experiential learning settings and he has undertaken a number of studies on Outward Bound, including his PhD. In 2014, he was co-author of Legends in Black, a bestselling book about why the All Blacks win. His career began in the United Kingdom teaching mathematics and coaching football at Millfield, a top public school. Following on from his master’s degree at Loughborough University, he managed programmes and events for a leading health-club facility near London. After moving to New Zealand in 1993 he worked as event manager for the Hillary Commission Big Coast series of mountain-bike treks. In 1994 he took up his current position at Massey University and now manages a successful series of children’s triathlon events in Manawatū. He has participated in the New Zealand Ironman and most recently for New Zealand at the age group World Triathlon Championships. He holds professional coaching qualifications in football and tennis, and has been actively involved in coaching at both junior and senior level.