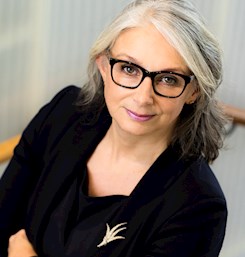 Claire Robinson (@spinprofessor) is Professor of Communication Design, Pro Vice-Chancellor of Massey University’s College of Creative Arts, and a member of Massey University’s Senior Leadership Team. She is also a New Zealand political scientist, political commentator and graphic designer. Claire’s areas of research expertise include the visual communication of political messages, political advertising and marketing, leadership image, media bias, and election campaigning. Claire is one of the leaders of the Design + Democracy Project, which was responsible for producing the hugely popular youth voter advice application On the Fence during the 2017 and 2014 New Zealand general election campaigns, and VoteLocal in the 2016 local body elections. Both tools have won national and international awards for design and innovation. Claire is a two-time finalist in the Fairfax/Westpac Women of Influence Awards in the Arts and Culture category, and a finalist in the Education category of the Wellingtonian of the Year Awards in 2017.