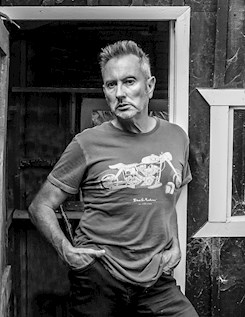 Born in Clyde in 1959, Ken Downie grew up in St Clair, Dunedin. With the proceeds from his milk run and by selling copies of the weekly paper Star Sports, he bought his first motorbike, a Suzuki GT185, while he was still at high school. Ken’s photography career began in the photography department of the Dunedin Public Art Gallery, where he worked as a photographic technician before gaining admission to the highly regarded photography course at the Wellington School of Design in 1985. A job as a photographer at the National Museum of New Zealand — now Te Papa — followed. In 1990, Ken left for Hong Kong, and became interested in a more documentary approach to photography; combining interviews and writing with image taking. Today Ken’s interests range from portraiture to architectural and industrial photography. He has documented large construction projects, and worked as a photojournalist for Metro, North & South and the New Zealand Listener. His photographic projects are held in the permanent collections of the National Library of New Zealand, Te Papa and the Hocken Library. As a writer Ken is fascinated by stories about people, architecture, art, culture and also, of course, motorcycles.