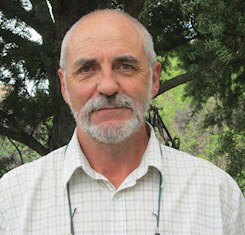 Kevin Stafford (MVB MSc PhD FRCVS FACVSc) is Professor of Veterinary Ethology and director of post-graduate studies at the Institute of Veterinary Animal and Biomedical Sciences at Massey University. Kevin is a veterinary graduate from University College, Dublin, and has an MSc in Tropical Animal Health and Production from the University of Edinburgh. In 1987 he was awarded a PhD by the National University of Ireland.

Early in his career Kevin spent a decade working as a veterinarian in Yemen, Belize, Zambia and Ireland. In Zambia he established and headed the clinical veterinary department in the School of Veterinary Medicine at the University of Lusaka. Kevin came to Massey University in 1990 where initially he taught sheep medicine and production. Later he specialised in animal behaviour and welfare. He has been on the editorial boards of the New Zealand Veterinary Journal  and Applied Animal Behaviour Science. He has published more than 250 refereed scientific papers  and has written two textbooks — The Welfare of Dogs and Animal Welfare in New Zealand — and is the co-author of The Sciences of Animal Welfare.