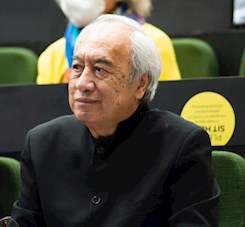 Witi Ihimaera (Te Whānau-a-Kai, Te Aitanga-a-Māhaki, Rongowhakaata, Ngāti Porou, Tūhoe) has had careers in literature, diplomacy and academia. He was Aotearoa New Zealand’s first Māori novelist, with his novel Tangi (1973), and works as editor, essayist, filmmaker, playwright and critic. His latest book is Navigating the Stars (2020). He served for 16 years as a New Zealand diplomat, in Canberra, New York and Washington, DC. He is Emeritus Professor of English at the University of Auckland Waipapa Taumata Rau. His international awards include a Premio Ostana, 2010, and a Chevalier de l’Ordre des Arts et des Lettres, 2017. He is patron of Kotahi Rau Pukapuka Trust and, in 2022, was made President of Honour of the New Zealand Society of Authors. He lives in Tāmaki Makaurau Auckland.