We are continuing to experience some courier delays, especially within the Auckland region. We apologise for any inconvenience this may cause. While we aim to deliver orders within 3–5 days, we ask that you allow up to 10 days for your order to arrive. 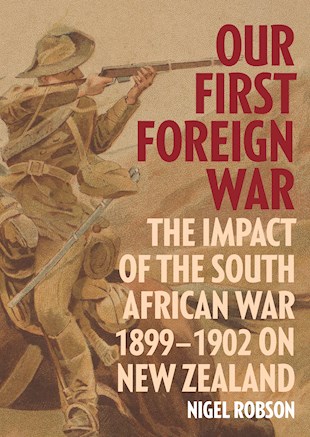 When war broke out between the British Empire and the Boer republics in 1899, New Zealand was among Britain’s most enthusiastic supporters. Many welcomed the opportunity to prove their nation’s military capabilities and its loyalty to the Empire.

Although the numbers sent to South Africa were small, the response at home was on a grander scale. Contributions to the war effort flooded in and New Zealanders closely followed the fortunes of their contingents in the field and the drama of the sieges of Mafeking, Kimberley and Ladysmith. Patriotic men, women and children packed fund-raising events and joined military volunteer and school cadet corps.

This is the first book to examine a phenomenon that has few parallels in New Zealand history. It offers a finely grained analysis of the nation’s response to the South African War, and the conflict’s enduring impact on New Zealand.

‘. . . an important and timely study. It has taken far too long for a scholar to analyse the domestic impacts of the South African War — hopefully Robson’s compelling lead will soon inspire many other researchers to follow’ — David Littlewood, Kete

Nigel Robson is a senior historian at the Office of Māori Crown Relations — Te Arawhiti.