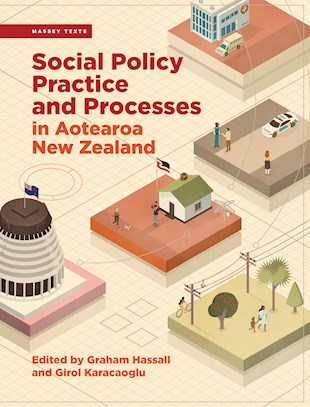 The focus of this book is the practice of social policy in Aotearoa New Zealand. It is intended to complement and update the fourth and final edition of Cheyne et al.’s Social Policy in New Zealand (2008), which pre-dated the three-term tenure of the conservative Key/English governments and their concomitant approaches to social policy.

In the first two decades of the 21st century, both conservative and social democratic governments have had opportunity to conceive and deliver programmes aligned with their fundamental values and concepts. These include the Fifth Labour Government (1999–2008) headed by Helen Clark, the Fifth National Government (2008–17) under John Key and Bill English, and the Sixth Labour Government (2017–) led by Jacinda Ardern.

Appraisals of the policy impacts achieved by alternating approaches to government are offered through each of the chapters on specific policy areas. Each chapter also introduces the reader to the background and context to its central topic, as well as key concepts, ideas and influences, and the main alternate views that have been put forward. In addition to assessing recent experiences, each chapter considers possible future issues that policy-makers may have to contend with.

Graham Hassall is an associate professor at Victoria University of Wellington.

Girol Karacaoglu is head of the School of Government at Victoria University of Wellington.