Images of New Zealanders in the Second World War 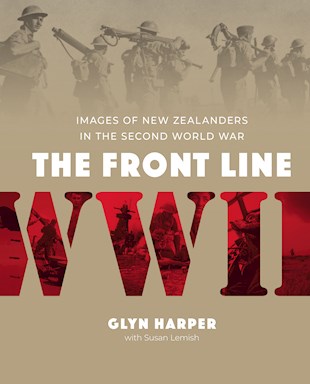 New Zealand’s war through the lens of those who served

A landmark book exploring New Zealand’s second world war effort through over 800 photographs, many never before published and many live-action shots taken by those at the front. The images span North Africa, Europe and the Pacific, as well as action on the water and in the air — every battle and theatre in which New Zealanders fought.

The text by one of New Zealand’s leading military historians places the images in context. Chapters on prisoners of war, the home front and New Zealand’s role in Japan after the end of hostilities in the Pacific round out this rich visual account of a conflict that dominated all aspects of New Zealand life for seven years.

‘The Front Line is a well-researched and well-presented book that will interest anyone who would like to know more about the Second World War. The images are immediate and compelling and take you back in time in a way that is difficult for words alone to convey. Simply put, this is an excellent book.’ — Karen McMillan, NZ Booklovers

‘Pity, pathos, pomp and many other emotions are evoked in this collection ... An authoritative and frequently affecting book.’ — David Hill, Kete

‘[The Front Line] is rich in facts and figures, which come at the reader with the rapidity of machine gun fire. But that is no bad thing because context is everything and they bring a perspective in depth to the book that elevates it way beyond being just another pictorial account of the war.’ — Alister Browne, Stuff

Glyn Harper is Professor of War Studies at Massey University.