Q1: What prompted you to write the book?

I was asked to take on the commission a while ago now, back in 2013. It appealed to me because I have long lectured and talked about the religious role in social work and I wanted to focus more closely on the ways in which social work agencies have adapted from their original motivation. So this was a perfect topic for detailed research. Then the bonus was that it proved a marvellously colourful story to write about.

Q2: Is the Auckland City Mission as relevant today as it was when it began? Or more so, perhaps?

I would say that it is incredibly relevant today: partly in the same ways — poverty is still endemic in the contemporary city — and partly in new ways. The other aspect is that to really make a big difference, social agencies need a lot of capital and resources, so they have to respond to current needs. On the other side of the ledger, governments feel the need to touch the community in times of crisis, and so it has been fascinating to see how the City Missions have been viewed by successive governments as agencies that can make a difference that governments can’t.

Q3: How has their engagement with the poor changed over the decades?

It has become more professional, of course, and sometimes that means a risk that it becomes less caring. But, in fact, I don’t think this is the case; I know a number of Mission clients and it intrigues me how personal it is. On the other hand, there is less of the ‘jolly’ attitude that was very evident in the early years, when sometimes they didn’t address the deep structural reasons why there were so many poor in the city.

Q4: Was there a particular period that you were most interested in or that was especially important to the development of the Mission?

Well, the 1920s were a great place to start, but I got more and more interested in the different phases of the Mission, and I really relished trying to understand the periods where a lot of the information had disappeared — the 1970s and the 1990s. The Mission’s phases were very different and contrasting! I was very excited to be able to find much more about some ‘lost’ periods in the history, with the assistance of various people.

Q5: Was it harder to research and write the more contemporary chapters?

Writing contemporary history is nerve-racking in two ways. Firstly, people who are still living are understandably concerned about the way they are portrayed, and I had to find a way to write honestly but appropriately. And that was the other issue: how do you see the current position in perspective? It kept changing even after the book was finished, and I ended up rewriting the final paragraph at the last minute.

Q6: You mention in the book that is was difficult to access the voices of the clients of the Mission.

I have always struggled within giving voice to the voiceless in history. The writing of any book for me involves the huge work of reading the records of the organisation and exploring the known names and turning them into live people. But how to do this for the clients of the Mission? Especially today, when we are rightly reminded to ensure that we have informed consent before we quote anybody. I know some people who receive support from the Mission, but how typical are they? Sometimes the clients are quoted in Mission reports, and I used these comments but what if the clients wanted to grumble about the Mission as mean or moralistic? I would love to have been able to trace the changing voice of the poor, but it proved very difficult indeed, and was one of the hardest struggles of this project.

Q7: How important are the illustrations in the book?

I spent a huge amount of time on these, and the Press and the Anglican Archives and I were very busy at the very worst time during lockdown identifying photographs that matched the text. I wanted to inspire people’s imaginations with the feel of the times, as only a photograph can do. There were some frustrations as some newspaper photographs were not suitable to be used, but there were some real gems we discovered.

Q8: The ACM seems to be thought of warmly by many Aucklanders, even those not directly involved. Was this always so, or has this changed over the years?

For many years it was essentially Anglicans that supported it, but that steadily broadened simply because it lived up to its pledge not to act in a sectarian fashion. Sometimes in those early days it got severely off-side with the more militant sector of the poor, and this was so during the Depression years when Calder was ferocious towards the Communist group who recruited within the Mission doss house! So that was an interesting time, when the Mission commanded respect and hostility.

Q9: The Mission has been at the forefront of social work in a number of instances. Which of these particularly stand out for you?

There are some bold moments in the Mission history when it set out against the conventions of the day to reach out to needy and neglected communities. The time when it set up a house for street kids in the 1980s when they were everywhere condemned. The moment when it created a place of respite and support for AIDS patients, at a time when no one would even touch them. And the time when they went among the elderly poor in Freeman’s Bay and created a plan to house them in their own little cottages. Those were such creative moments.

Q10: What are you reading at the moment?

I have been reading lots of novels, but I have also been doing quite a lot of writing and lecturing, often to Zoom screens. This week I gave two special lectures; one to chaplains of St John Ambulance and the other — totally different — on the influenza epidemic in 1918 and how lockdowns in that period affected churches and businesses. Next week I will do a lecture on the changing shape of New Zealand society. I am keeping myself out of mischief! 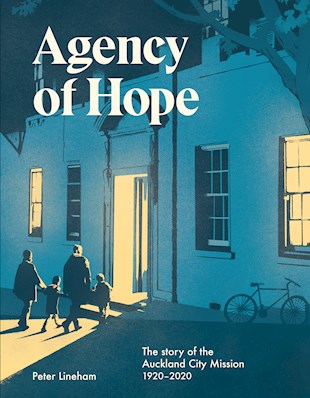