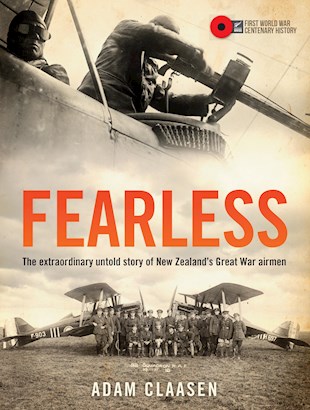 During the Great War, 1914–1918, New Zealanders were keen participants in the new field of military aviation. Close to 850 men, and a small number of women, from the Empire’s southernmost dominion sought positions in the British and Australian air services.

Drawing on extensive archival material, historian Dr Adam Claasen explores New Zealand’s reluctance to embrace military aviation, the challenges facing the establishment of local flying schools and the journey undertaken by the New Zealanders from their antipodean farms and towns to the battlefields of the Great War. In spite of their modest numbers the New Zealanders’ wartime experiences were incredibly varied. Across the conflict, New Zealand aviators could be found flying above the sands of the Middle East and Mesopotamia, the grey waters of the North Sea , the jungles of East Africa, the sprawling metropolis of London and the rolling hills of northern France and Belgium. Flying the open cockpit wood-and-wire biplanes of the Great War, New Zealanders undertook reconnaissance sorties, carried out bombing raids, photographed enemy entrenchments, defended England from German airships, strafed artillery emplacements and engaged enemy fighters. By the time the war ended many had been killed, others highly decorated, some elevated to ‘ace’ status and a handful occupied positions of considerable command. This book tells their unique and extraordinary untold story.

‘It’s a wonderful book — one that risks inducing a Peter Jackson-sized enthusiasm for the biplane era’ — Russell Baillie, NZ Listener

‘Meticulously researched, this is a first-rate contribution to the aviation literature of the First World War’ — Alex Spencer, National Air and Space Museum, Washington DC

‘It's an extraordinary work of scholarship’ — Joan Mackenzie, Whitcoulls

‘Fearless is not a dry history about the planes and their parts. Rather, it combines the military and political scene with the stories of individuals. We learn the stories of the early pioneers, the political activists, the daring adventurers. It is here – in the stories of the passion and persistence of some of these young men who were determined to fly into war -that I found the greatest interest. Their stories are detailed, lively and often humorous.’ — Booksellers NZ

Adam Claasen is a senior lecturer in history at Massey University’s Albany campus.