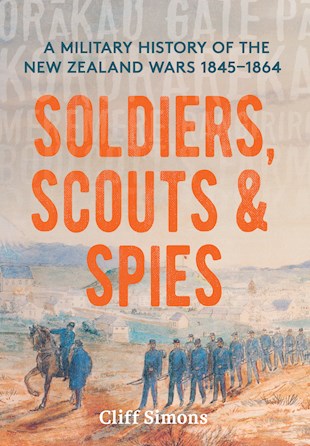 As interest in the New Zealand Wars grows, Soldiers, Scouts and Spies offers a unique insight into the major campaigns fought between 1845 and 1864 by British troops, their militia and Māori allies, and Māori iwi and coalitions.

It was a time of rapid technological change. Māori were quick to adopt western weaponry and evolve their tactics — and even political structures — as they looked for ways to confront the might of the Imperial war machine. And Britain, despite being a military and economic super power, was challenged by a capable enemy in a difficult environment.

This detailed examination of the Wars from a military perspective focuses on the period of relatively conventional warfare before the increasingly ‘irregular’ fighting of the late 1860s. It explains how and where the battles were fought, and their outcomes. Importantly, it also analyses the intelligence-gathering skills and processes of both British and Māori forces as each sought to understand and overcome their enemy.

To watch a short introduction to the book, click here.